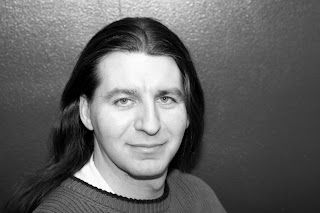 Today was the first preview of El Numero Uno. The villagers in Lopinot are out in the world, fabulously costumed, gorgeously lit, making their own music and telling the story of their town's predicament and how they deal with it... Big thanks to everyone, actors, creative team, administrative team, front of house, production, sales, marketing, volunteers, sponsors, the remarkable thespians, ahrdi zina mandiela, the director, and the artistic director, Allen MacIniss, who took a chance on a teenage pig. So many people have worked together to make El Numero Uno happen, one of them being LKTYP's dramaturg, Stephen Collela, whom we feature today.

Stephen, who hails from south of the border, down Philly way, is a graduate of the Masters of Philosophy (MPhil) Dramaturgy program at the University of Glasgow and has a BA in English with Minors in Theatre and German from Loyola College in Baltimore. Among his past projects at LKTYP: Co-adapter of Love You Forever…And More Munsch (Dora Award, Outstanding TYA Production/Canada Council Theatre for Young Audiences Prize), Dramaturgy for The Princess & the Handmaiden, Hana’s Suitcase, i think i can (Dora Award, Outstanding New Musical), and Touch the Sky.

Stephen kindly agreed to answer some of my questions. Here's our little chat.

Dramaturgs seem to do all kinds of things, according to which country or which theatre tradition, or indeed which company they work with. What is your job at LKTYP?

Well, as you said, dramaturgs do all kinds of things and that holds true not just for the position in general but for my work at LKTYP as well. The primary focus of my work is our new play development. For our purposes, this means not only working directly with the playwrights, in the workshops and on the scripts, but also casting and organizing the workshops, managing the play development budget, managing our unsolicited script submissions, reading previously produced scripts and working with Allen, our Artistic Director, on our long-term planning. In addition to this work, I also coordinate our auditions, see productions that we could potentially present at our theatre, occasionally work with Educational Services on the study guides and proof all of our external documents. I also get involved with mundane things like tech support and fixing photocopiers, but that's more by happenstance than design. I have probably left a few things out, but one of the best things about my job is that the requirements are diverse and that helps to keep things fresh and interesting.

Dramaturgs are sometimes playwrights. Have you written plays?

I, along with Sue Miner, adapted five short stories of Robert Munsch that were staged at LKTYP. The play was called Love You Forever...And More Munsch. It won the Dora Award for Outstanding TYA production that year and was produced at Carousel Theatre this past fall. It will also be running for a week at the Stirling Festival this summer. But, other than that one piece, no other playwriting for me yet.

Does dramaturgy differ from play to play?

Dramaturgy is always different play to play, even working with the same playwright. There isn't really a set process. It depends on the individual needs of the play as well as the individual needs of the playwright. There are similar features in that each dramaturgical relationship requires good communication and a healthy amount of respect for who you are working with and what you are working on, but every instance needs to be tailored to the project's needs.

You were involved with developing El Numero Uno over a number of years. Is this usually the case?

I think it's normal to expect a script to take at least a couple of years to develop. Plays come to us in very different states. Sometimes they are a kernel of an idea and other times they have already had a few drafts and been through a workshop process. Frequently they end up somewhere in between. What is important is not to allow a schedule to dictate the development of the play, but to work to the needs of the play and allow the development to run its course before deciding to program it. Giving the play (and the playwright) that time to breathe and take the proper amount of time with the development as they require is what leads me to say that normally a couple of years is to be expected.

Was there anything particular or peculiar about El Numero Uno?

Can I say the playwright and not have her upbraid me? Of course I am teasing, except to say that she was particularly lovely and peculiar in her indulgence of my occasional brattiness. I would say that the particularness of El Numero Uno is, as Allen has said previously, the Shakespearian nature of the language. And I take that not just to mean the poetry of it, but also that it uses an English that is at once both familiar and strange to the majority of North American speakers. That character and richness is what made the play both fascinating and challenging. For me it required extra special care to be sure that I understood everything I was responding to. Fortunately I had a lovely group comprised of the playwright, director and workshop actors to help illuminate that process for me and make that task as easy as possible.

When all is said and done I'll miss being able to work with Pam, but I'm glad that her little wiggly pig has finally made it to the stage.

Many thanks for answering my questions, and for helping to make El Numero Uno happen, Stephen!
Posted by clarabella at 6:20 PM 4 comments:

clarabella
Toronto, Ontario, Canada
Writer, on my passport, and as the way I earn my living and have done for twenty years or so. Mother of two sons and one daughter, and grandmother of the amazing Zoey. Mate of Martin, whose debut YA novel, BLUE MOUNTAIN TROUBLE, was named by KIRKUS reviews as one of the 35 best children's books published in the US in 2009. Concerned about the truth, lost souls, song and story as a way to save us, the plight of the world, especially the majority world, and planet earth.